HoloSpect 3D wheel demo is available now for free in the AR Magazine also. Just click below and get the app. "See any wheels on any car." Now accepting wheel brand's real styles also. For info- sales@aerolarri.com

​Click the Picture, or Link below to get the App.


​Note: the car colors using Android will be slightly more vivid than what's shown. It is due to how the system reflects light off what's actually the same color. So I added an environmental reflections changer so you can play around to suit your taste.
The Reveal Demo Video:
Instructions:

1: Choose Your Reality. Then for a car, press the top controls to enable the choices while the car is stopped.

3: Walk up to the 3D Article to read. Move closer to increase text size.

4: Turn off all controls to get awesome screen recorded videos and screenshots for sharing on Facebook, Instagram or wherever.

Media is constantly changing, and the newest frontier is Augmented Reality (AR). AR is so new, that its uses are mostly unexplored. So, I had a cool idea. Let’s make magazine which delivers content in AR. Issue #1 of AEROLARRI AR Magazine is around 10X more powerful than any other comparable app.

Get 2 versions of the AEROLARRI Bernoulli concept car. 1) A Jet version 2) the Electric (EV) version.

• Drive the cars in AR.
• Choose your car's color, and wheel design.
• Hide all the controls so you can take great screenshots and screen video recordings for   sharing with your friends.
• Open the world's first AR magazine Article for reading in 3D, while in AR.
• Investigate the RimWings and EV Propulsion demo models in AR.

You will be able to gain access to future amazing AEROLARRI AR Magazine articles with in-app purchase when Issue #2+ arrive. While we clearly have an automotive focus, future issues might include bonus articles other than cars! As long as it absolutely blows your mind, it's fair game.

Media is constantly changing, and the newest frontier is Augmented Reality (AR). AR is so new, that its uses are mostly unexplored. So, I had a cool idea. Let’s make magazine which delivers content in AR.  AEROLARRI AR Magazine is a holographic reality onto which the subjects are projected in infinite forms. But a true magazine should pay homage to its roots and thereby consist of written articles. And so here you read this- and the other articles within Issue #1 of AEROLARRI AR Magazine. Once upon a time, printing technology was at a state where simple pictures could not be added on a page. Imagine the revolution which looking at images of reality on a page must have been at that time of transition. And here you stand today looking at pages on your reality.

Once upon a time, printing technology was at a state where simple pictures could not be added on a page. Imagine the revolution which looking at images of reality on a page must have been at that time of transition. And here you stand today looking at pages on your reality.

Sharing the screenshots and videos on your social media is where this AR magazine gets really fun. The app’s built-in mode which allows you to turn off the visible controls is intended for video capture and picture sharing on social media. Imagine all your friends’ reactions when they see you standing behind Issue #1's AEROLARRI Bernoulli in your own driveway like you own it- which you do. They’ll say, “What is that car?! How did you get that car, lol?! This is impossible!! My mind is blown…” You will definitely get some laughs and have some parody fun since the car can't possibly be seen in such an environment! 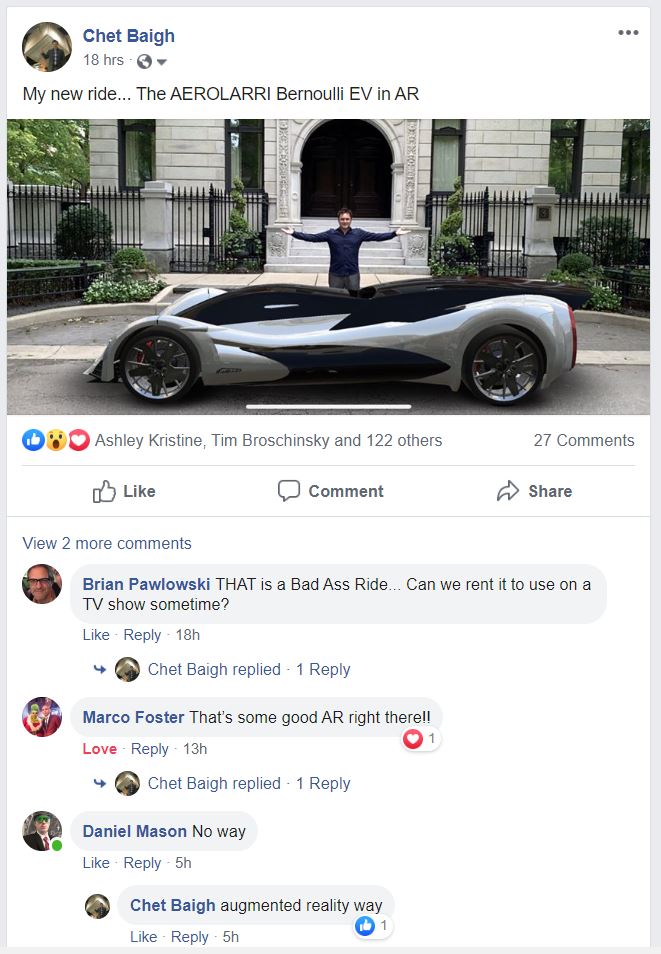 The State of The Art

The one promise of this magazine is that it must be at the cutting edge of technology in content, creativity and/or delivery. The state of the art today allows for strategic technological advantage. That strategy is to be the first to tailor content for the 4G-to-5G transition. This is a difficult balance because the content thusly needs to be completely maximizing the speed and power of 4G phones during the transition. And when 5G phones with their more advanced hardware and speed become the norm, the AEROLARRI AR Magazine will be there waiting with a personified smirk. Then the further-out Issues of AEROLARRI AR Magazine will test even their capabilities. There’s no particular technology or platform which is of preference, so long as it is suitable for astonishing the subscriber and making them maximally happy.

How Did This Come About?

AEROLARRI was founded to make inventive aerodynamic parts for cars. One of those patent pending products which are currently for sale or pre-order on the website are RimWings. RimWings fit basically every car on Earth, given they bolt onto a car’s lug nuts. So, if they were launched as showcased on a Lamborghini, the Ferrari people would dismiss them. The same could be said for Camaro people, Porsche people, Mustang people, Corvette people, and so on. Thus, a pursuit began for them to be showcased on simply the coolest car possible. The coolest car about which nobody could argue. Which would be best- a Chiron, an Aventador, a 488, a C8, a McLaren, or others? All of them, perhaps?
What I decided to do is design my own flagship car which had no preconceived opinions. That process turned into a passion and at times an obsession. It had to be wildly different, gorgeous, unlimited in every sense, and thusly cool. The result was that I had two versions of a pretty sweet ride and a few more related inventions to disclose. The Bernoulli concept car was born and (especially the EV) became an asset for the company. Even the whole car has a design patent and certain parts had licensable utility patents. How would I get it onto the roads and into peoples’ driveways? Well, my compromise was to design an augmented reality app which conjured the car. An idea became a reality, which was, in reality, a new reality full of new ideas.

• Yearly Subscription: $4.99/year
• Low Price is locked-In for subscribers regardless of near-term price increases!!!
• Payment will be charged to iTunes/ Google Play Account at confirmation of purchase.
• Account will be charged for renewal within 24-hours prior to the end of the current subscription period.
• You can manage and cancel your subscription by going to the account settings on the Store after purchase.
• Any unused portion of a free trial period, if offered, will be forfeited when the user purchases a subscription.
• Terms of service: https://www.aerolarri.com/terms-and-conditions--privacy-policy.html
• Private Policy: https://www.aerolarri.com/privacy.html

The AEROLARRI AR Magazine app is around 10x more powerful than anything before, so you may want to follow these to get the best possible experience.

1) Restart your phone before each use.

Note: As the app runs, the chip, display and battery get hotter and memory gets used. At a certain point, due to Apple/s iOS 13.1 + updates, processor throttling may reduce the framerate. Follow 1) + 2) to reset.

1) Your environment must be very well lit.

2) When opening a scene, the blue circle changes size based on what you show it in the environment. This will scale the initial object to the size of the blue dot. The smallest dot is usually best.

3) If the car runs away from you, or you move to another location, just restart the scene.

6) Do not use in rain or on a reflective surface. The program will get confused and objects might float away.

​8) In order to change the wheels, colors and such, the car must be fully stopped. Every time you come to a stop, the car will park itself and allow for those menu buttons to activate. There will be a slight delay switching out of gear into drive or reverse as a result.

9) There is no sound other than the intro video (for now).

WARNING: Be aware of your surroundings when using the App! DO NOT walk onto public streets or violate pedestrian laws (or any laws), regardless of what you have seen anyone else do. Real cars can hurt! Drivers will not understand what you are doing in the road! They will think you are crossing and might keep their car's momentum expecting you to move. This means you might get hit by a car. Also don't trespass and violate any law and/or norm when using the App. Your safety is the most important matter to us and I/we, as well as you should take that seriously. AEROLARRI (a subsidiary of Alarri LLC) and/or Chet Baigh does NOT accept any liability for you getting injured, killed, or any other repercussions while using and/or misusing the App. Check my/our Terms here for legal and unabridged version of this disclaimer and your agreement of using the Services and/or Products / App. The use of the App by children under an age required to accept these Terms, within your jurisdiction, requires documented pre-approval by a parent or guardian. See the linked Terms page for more.

AEROLARRI AR Magazine is a true subscription based editorial magazine, like every other, which adheres to fair use guidelines and positive commentary and/or news articles which will support manufacturers' sales. It uses 3D models in augmented reality as an immersive media form just like regular pictures for the purpose of parody, education, public interest and to promote the progress of science and useful arts. The AEROLARRI AR Magazine is not a game. There is no competitive aspect, gamification, and all subject 3D models' performance characteristics are the same as every other. Performance characteristics illustrate and extend parody and are homogeneous in avoidance of game-like properties. Outreach for approval to use certain copyrighted, trademarked, and/or design patented material may be done out of courtesy, but is not mandatory, per fair use law and precedent. The magazine is not associated with or endorsed by any company or entity. Any transformative properties are implemented and intended to increase manufacturers' sales by both increasing exposure and positive artistic interpretation. No copyright is claimed in the magazine and to the extent that material may appear to be infringed, we assert that such alleged infringement is permissible under fair use principles in U.S. (and/or international) copyright laws. If you believe that material has been used in an inappropriate manner, please contact us at sales@aerolarri.com.

"The Android robot is reproduced or modified from work created and shared by Google and used according to terms described in the Creative Commons 3.0 Attribution License." Android is a trademark of Google LLC.

The Apple logo and App Store logos are registered trademarks of Apple Inc. 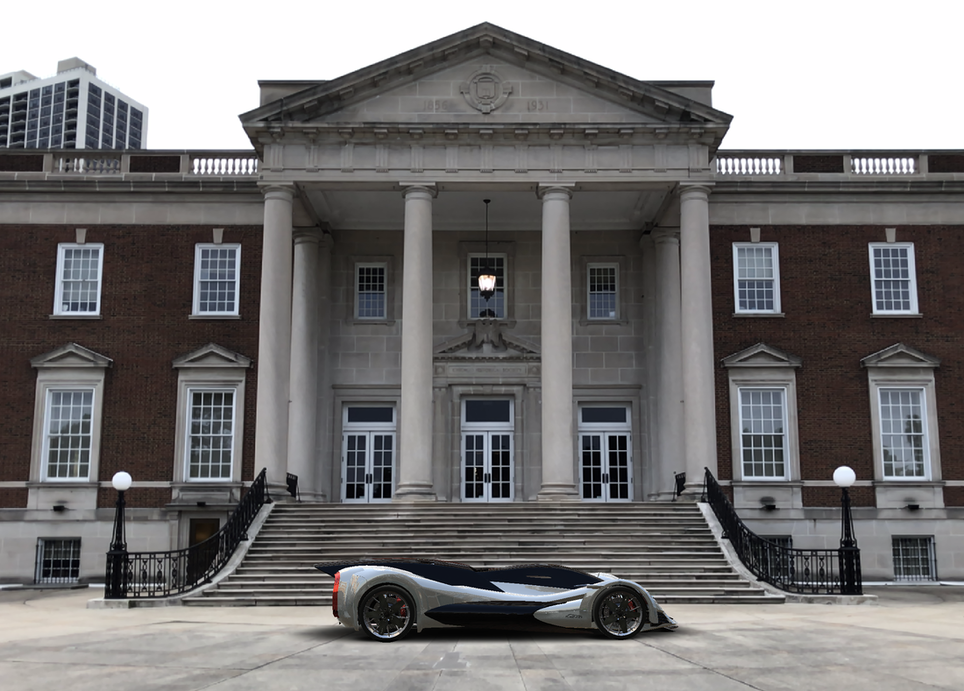