HoloSpect 3D wheel demo is available now for free in the AR Magazine also. Just click below and get the app. "See any wheels on any car." Now accepting wheel brand's real styles also. For info- sales@aerolarri.com 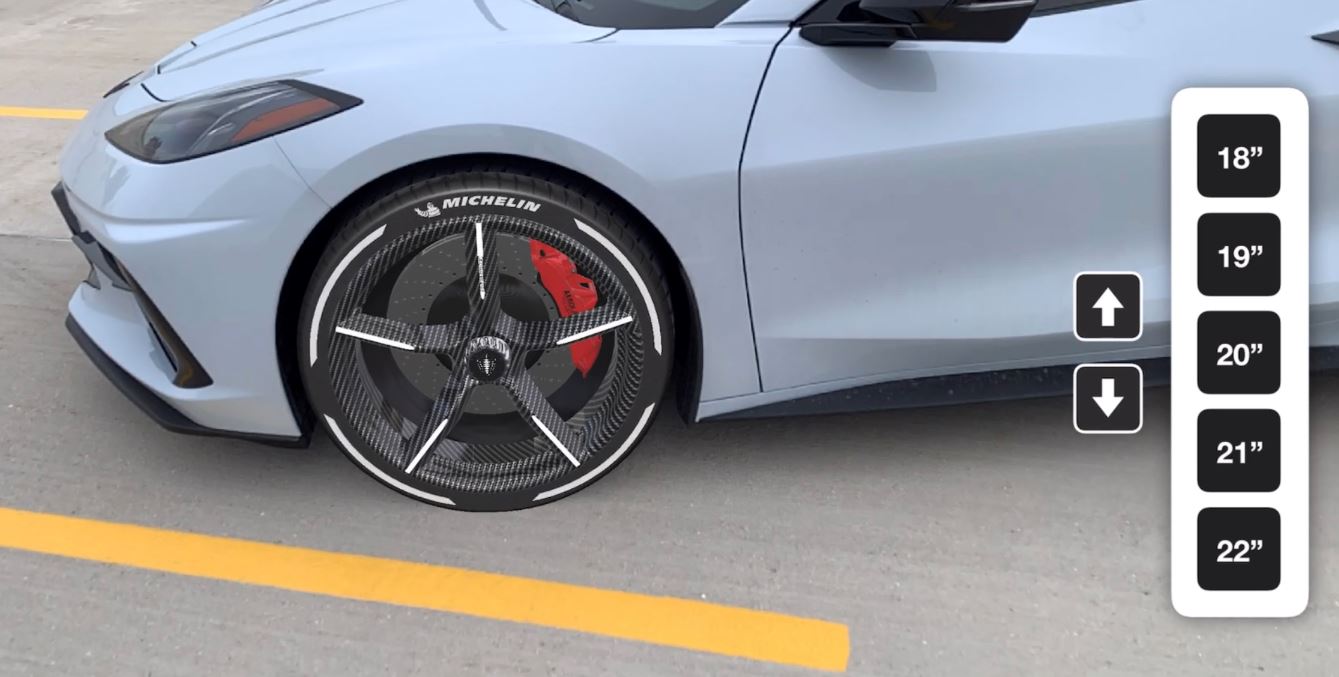 ​Click the Picture, or Link below to get the App.

​All Koenigsegg article models are not accurate. They were lovingly made and edited by us. Koenigsegg has provided no models or CAD files in support of their construction. As such any AEROLARRI logos in the models serve as a personal artistic signature to showcase that fact. Additional  artistic  transformative car features can be observed. Only Forgeline CAD files have been used to depict maximal accuracy.
--- ​Instructions: - Check the Full Instructions & Troubleshooting page HERE. ---
Issue #3 Article in AEROLARRI AR Magazine: Koenigsegg Gemera and Jesko Absolut
Koenigsegg Gemera & Jesko Absolut

Koenigsegg's Geneva Motor Show Reveal 2020. During the cancellation of the Geneva Motor Show due to COVID-19, Christian von Koenigsegg revealed their 2021 Gemera and top-speed focused Jesko Absolut which will soon be the world's fastest production car. (500 kph / 311 mph) Coronavirus didn't stop them and it won't stop you from enjoying them here.

• Drive the Koenigsegg Gemera & Jesko Absolut down your own street.

• Choose your car's color, and explore the interior.

• Hide all the controls so you can take great screenshots and screen video recordings for sharing. 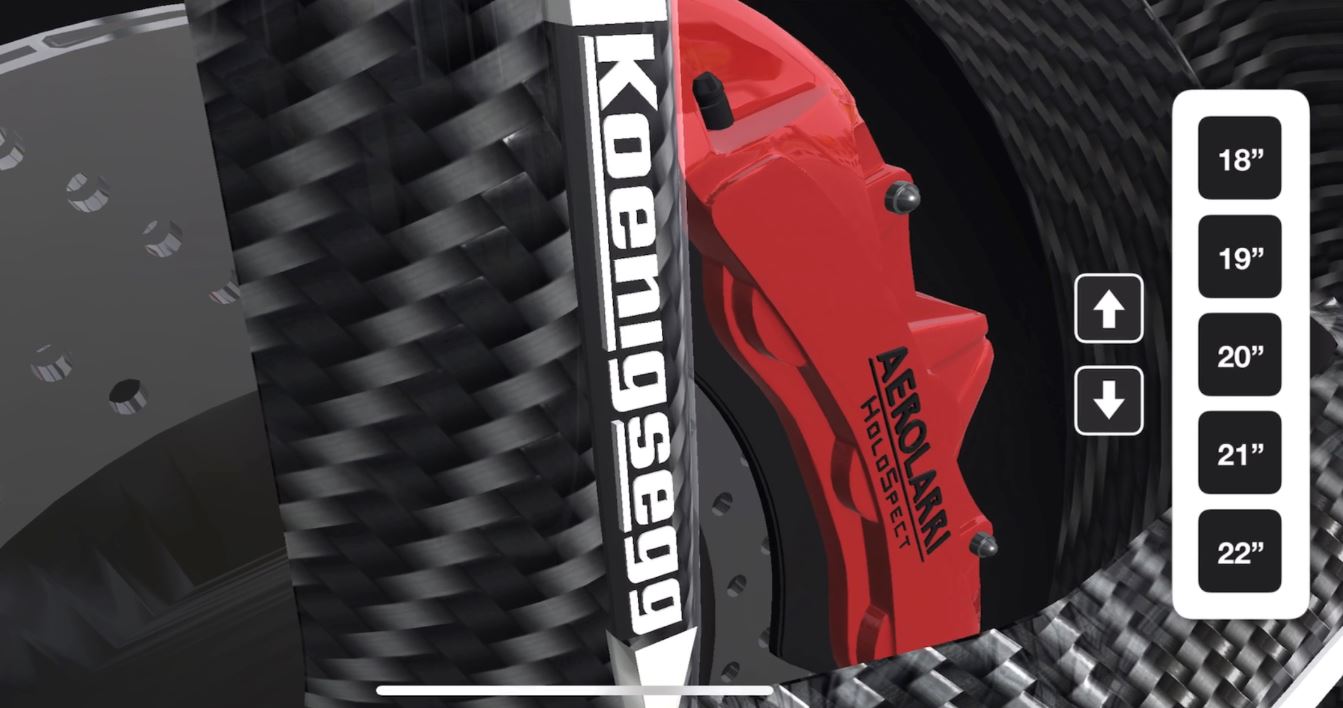 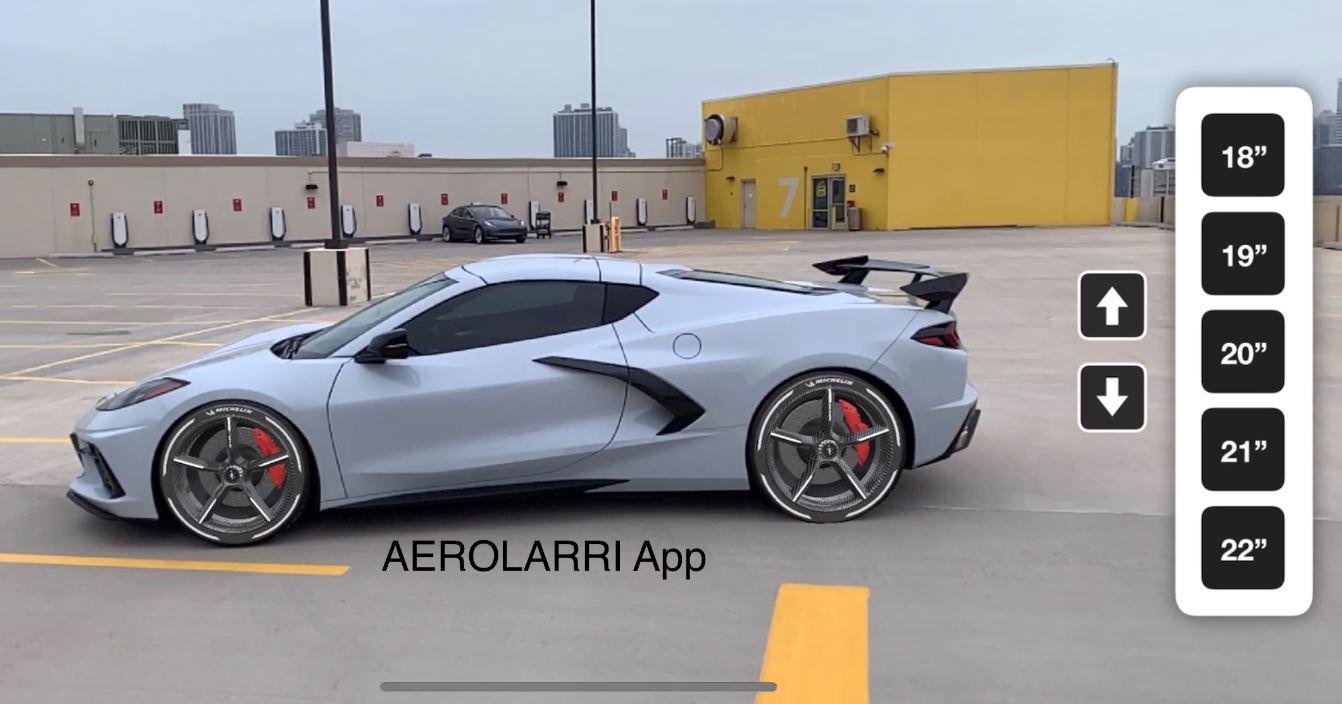 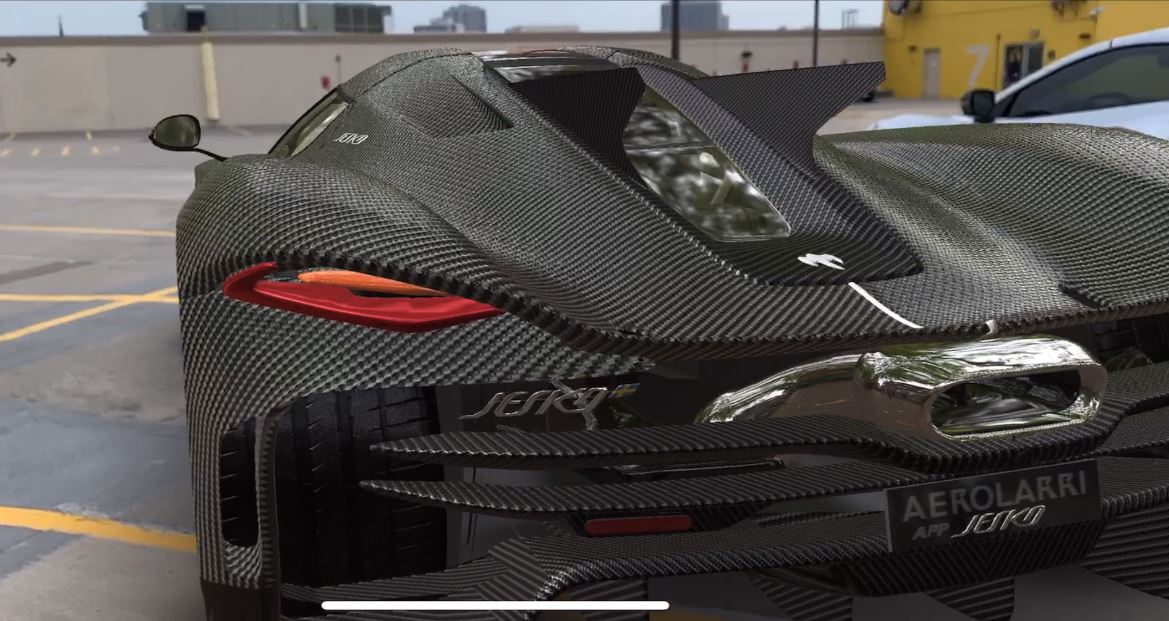 When I heard that the Geneva Motor Show was cancelled due to COVID-19, I had a radical idea. So, I emailed my contacts at Koenigsegg to ask if they wanted to reveal their new car(s) using my AEROLARRI AR Magazine. It was a natural idea given I had already been building the original Jesko for an article herein.
When I first discussed the idea of the Jesko article with them, I offered a buffet of features on which we could work together. For example, an exploded engine and transmission using their own CAD files. Everything was on track for a collaboration. However, the ultimate answer was that they were short on time because they were preparing for Geneva. This made me curious as to what was so important and time consuming about Geneva. Secrecy wasn’t really an issue since signing NDAs (non-disclosure agreement) is a standard practice I offer to get actual engineering CAD files. And so, I wouldn’t be leaking anything of any type. What could they be doing?

This made me pause the Jesko article development so as to wait for whatever would be revealed at Geneva. When the news came of the Geneva show cancellation. There was realistically not enough time for me to do a proper job with a new custom AR article development before the Geneva show, given its was only a few days away. But I figured since it was canceled, I would not be in any rush.


The Reveal
They ultimately launched their two new cars in the surprisingly innovative way for which they are known.  Koenigsegg is a company that throws out convention at every turn. Normally, that convention resides in the engineering world, but in this case,  it was in the marketing world. Koenigsegg salvaged everything they had worked so hard to present by doing the show anyway amidst an empty convention center! While every other manufacturer was packing up to leave, the founder, Christian von Koenigsegg would reveal the cars to a few key social media influencers and media. He was the only one who made use of the Geneva stage in 2020- and thereby got all the attention. It was brilliant. It was time to behold the Koenigsegg Gemera and the Jesko Absolut. My curiosity as to what they had been working so hard on was satisfied. Rather, my  curiosity turned into a dream about having $1.7 million in my bank for only a few seconds before giving it all to Christian in exchange for 1,700 hp.

What revealed to the world we’re two exceptional cars- the Jesko Absolut and the Gemera. Each in their own right would take center stage within the car world. But here we are graced with two stunning reveals. The Jesko Absolut is Koenigsegg’s version of the Jesko which aims to retake the title as the world’s fastest production car. It is a version of the original track-focused Jesko but with more streamlined aerodynamics to reach a higher top speed. The Gemera is a completely new model which has enough innovation that it might as well define its own new category altogether. It’s affectionately dubbed a “Mega GT.” First, it has an astonishing 1,700 hp coming from 3 electric motors, and get this, a 600 hp 3-cylinder engine. Secondly, it has 4 spacious seats and 2 long doors for a limousine-like outing with the family. That’s just the beginning.
Koenigsegg has multiple components to their brand. Perhaps the notion that the brand maintains an everlasting pursuit of innovation could be one of the most exciting. While all auto manufacturers do implement innovative ideas, it can be said that Koenigsegg routinely throws out conventional  automotive  engineering completely. No part of the car is safe from revolution.

The Jesko Absolut
Last year the Jesko was revealed to the world to fantastic acclaim. It is an amazing car. With numerous innovations, staggering performance figures and a complete style redesign, it made a splash. It was then touted by the media as the best contender to break the 300 mph top speed record for a production car. However, in the configuration that it was displayed, I immediately knew it wasn’t designed for that goal. Having an educated eye for aerodynamics and even a company called AEROLARRI, I knew that the car was not set up for that challenge due to the large rear wing and other aero parts. And Christian von Koenigsegg knew this too. The Jesko we saw then was a track-focused version. In other words, it was set up for cornering and generating the highest downforce possible. Creating downforce comes at the cost of aerodynamic drag. Having wings, canards, ducts and vents with high angles of attack reduces the overall streamline of a car. The more streamlined a car, the easier it can cut through the air and reach higher top speeds.  Also note that for every doubling of speed, the air resistance force goes up by a factor of four.
At Geneva this year, Christian revealed the real top-speed challenger- the Jesko Absolut. It is fittingly called the Absolut because it will be the fastest car Koenigsegg will ever peruse building. It’s proposed top speed goal is achieving 500 km/h (310.69 mph).

The new Jesko Absolut top-speed variant has almost completely redesigned aerodynamics to achieve the goal. The underlying car however is mostly the same other than a more forgiving suspension due to the alleviation of downforce burden. The list of aero changes for the Absolut is long. There is a fully elongated and reshaped rear end. The front canards and side fins are gone. The louvers for the wheel vents are replaced with tiny vent holes. The big hood vent is gone, and a handy frunk is now available. The big rear wing is gone and replaced with two vertical stabilizer tails, similar to a fighter jet.


Together this new package reduces the coefficient of drag greatly along with the downforce and friction. Now the Jesko Absolut stands to be the car to achieve the top-speed goals. We will be eagerly waiting to see those speed run results. When ordering the Jesko a buyer can choose either the Absolut or the track version. The Absolut has some advantages other than its top speed. The suspension is more comfortable, the added frunk are notable examples. Also, the bragging rights of the top speed potential. However, one surely has every right to brag about the track version as well. Actually, any Koenigsegg is sufficient in my view, and probably everyone else’s. ........................

Issue #2 - Drive Bloodhound LSR and Aussie Invader 5R Jet & Rocket cars! these land speed record cars are set to attempt to not only pass the sound barrier (mach 1) but pass 1,000 mph! Who will do it? Check them out in our 3D augmented reality articles.
Bloodhound LSR in AEROLARRI AR App: 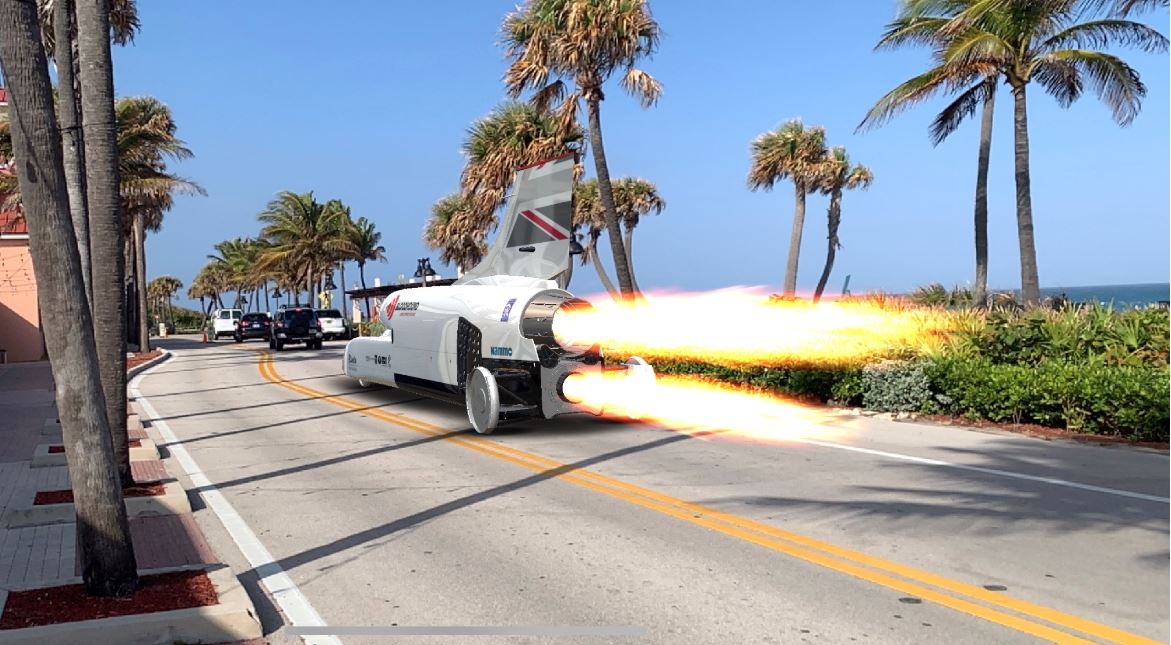 1: Choose Your Reality. Then for a car, press the top controls to enable the choices while the car is stopped.

AEROLARRI AR Magazine is a true subscription based editorial magazine, like every other, which adheres to fair use guidelines and positive commentary and/or news articles which will support manufacturers' sales. It uses 3D models in augmented reality as an immersive media form just like regular pictures for the purpose of insight, education, parody, public interest and to promote the progress of science and useful arts. The AEROLARRI AR Magazine is not a game. There is no competitive aspect, gamification, and all subject 3D models' performance characteristics are the same as every other. Performance characteristics are homogeneous in avoidance of game-like properties. Outreach for approval to use certain copyrighted, trademarked, and/or design patented material may be done out of courtesy, but is not mandatory, per fair use law and precedent. The magazine is not associated with or endorsed by any company or entity. Any transformative properties and content delivery forms are implemented and intended to increase manufacturers' sales by increasing exposure, positive artistic interpretation, and/or situational (or other) parody. No copyright is claimed in the magazine and to the extent that material may appear to be infringed, we assert that such alleged infringement is permissible under fair use principles in U.S. (and/or international) copyright laws. If you believe that material has been used in an inappropriate manner, please contact us at sales@aerolarri.com. The intellectual property depicted in the magazine, including the respective brands, are not affiliated with or endorsed by the original rights holders.The models are inspired by or based off certain car models and are not collaborations with any rights-holders.

"The Android robot is reproduced or modified from work created and shared by Google and used according to terms described in the Creative Commons 3.0 Attribution License." Android is a trademark of Google LLC.

The Apple logo, and App Store logos are registered trademarks of Apple Inc.

The intellectual property depicted in these car models, including the brand "Koenigsegg" and the Koenigsegg Shield Logo herein, are not affiliated with or endorsed by the original rights holders and is used under editorial fair use guidelines. Koenigsegg has provided no content like CAD files to more accurately represent the cars. As such, the cars are not accurately depicted, and independent transformative artistic interpretation can be observed. The models depicted are NOT designed by Koenigsegg. The Koenigsegg shield logo, and name are registered trademarks of Koenigsegg AG. They are depicted under strict adherence to fair use laws and precedent".

The intellectual property depicted herein, including the brand "Michelin" and the Michelin logo, are not affiliated with or endorsed by the original rights holders and is used under editorial fair use guidelines. Michelin has provided no content like CAD files to accurately represent their products. As such, the products are not accurately depicted, and independent transformative artistic interpretation can be observed. The models depicted are NOT designed by Michelin. The brand name Michelin and the Michelin logo registered trademarks of Compagnie Générale des Établissements Michelin SCA. They are depicted under strict adherence to fair use laws and precedent.

Koenigsegg has not provided any engineering files of any kind. All the Koenigsegg article model features including HoloSpect wheels and cars are independently created with only an artistic eye. They are not accurate representations and employ artistic interpretation.