How It's Made Videos 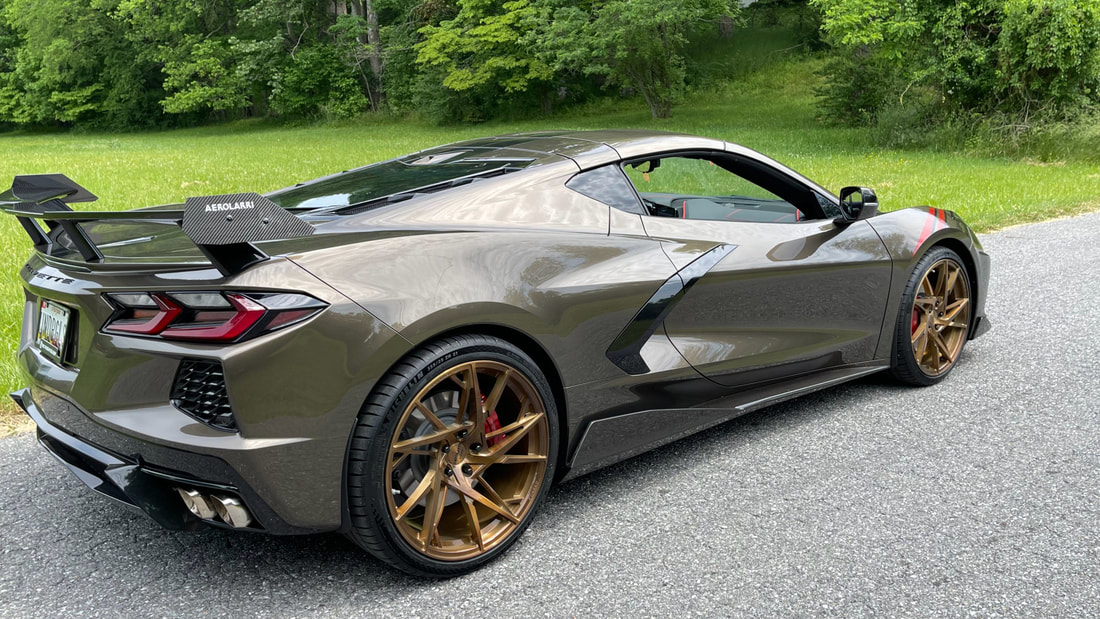 - NO RUB! - After hundreds of miles and testing, Carlton has experienced no rub on the 21x13 rears. Nor the fronts, but with 20x9.5, that's well-known with our other installs. This set was also tested to 147 mph with no drama whatsoever and perfect smoothness.

Suspension is stock (Not Lowered). Lowering is possible, however. See the spring compression pictures and videos in the fitment section below.
Fronts: 20x9.5
Rears: 21x13 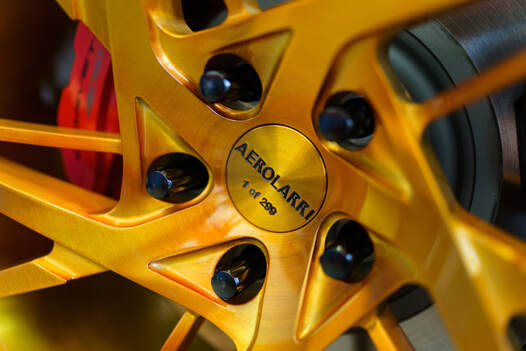 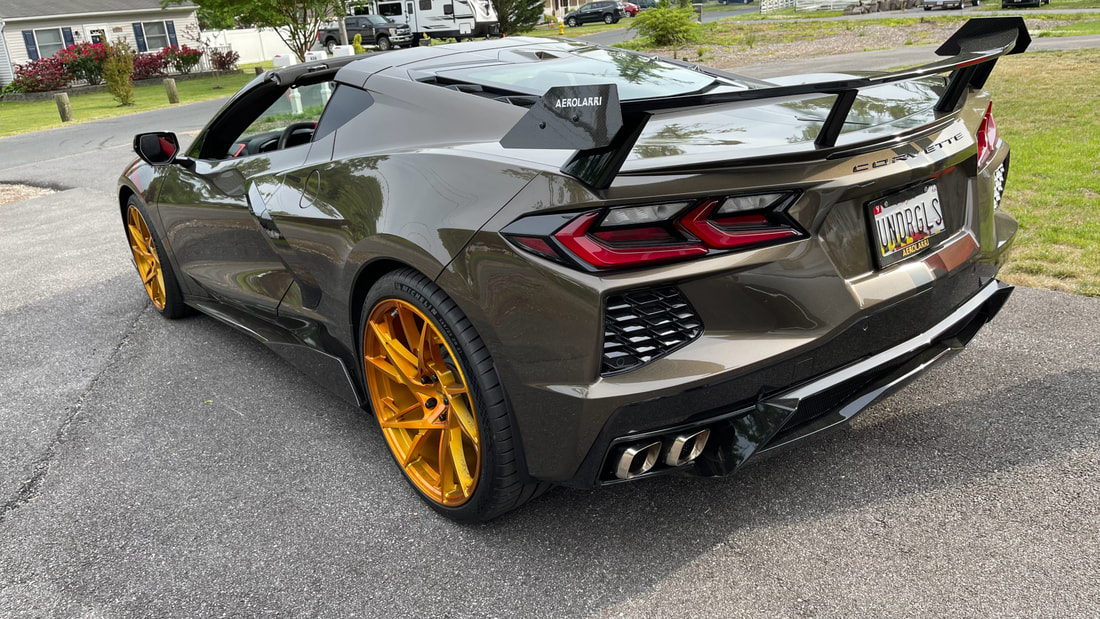 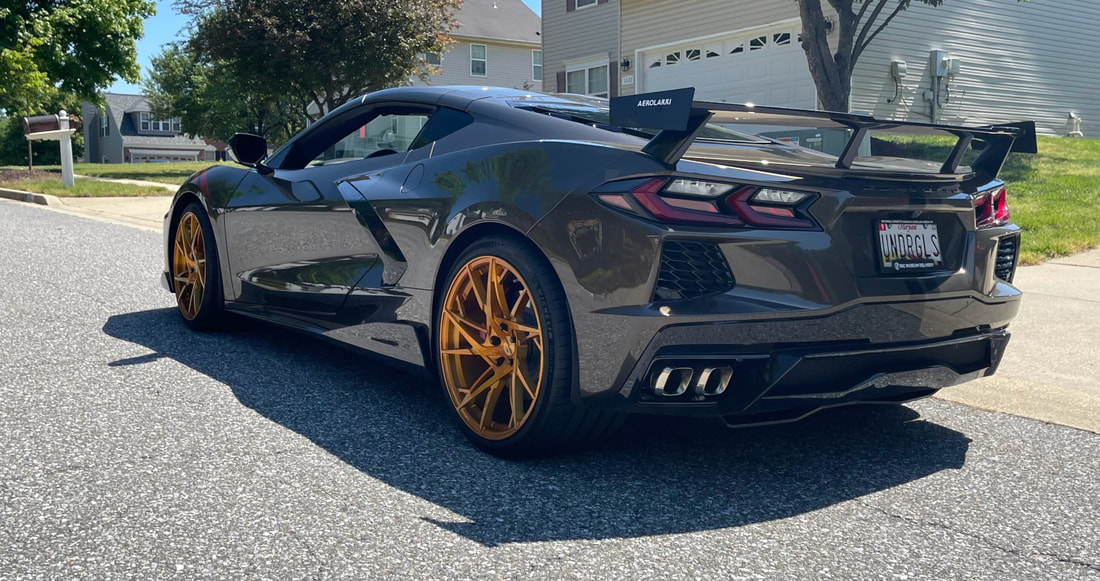 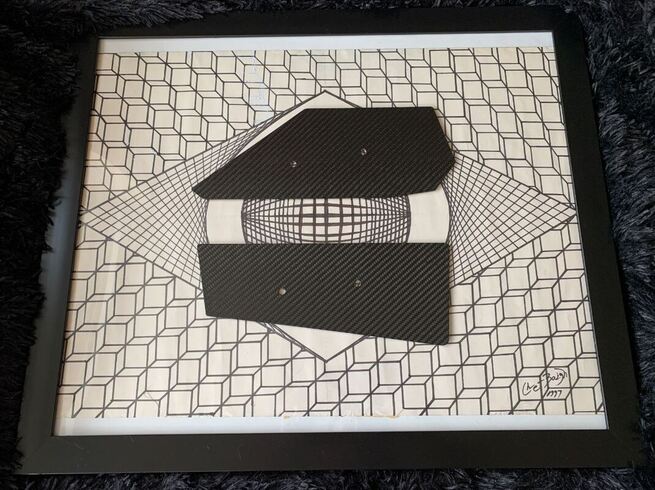 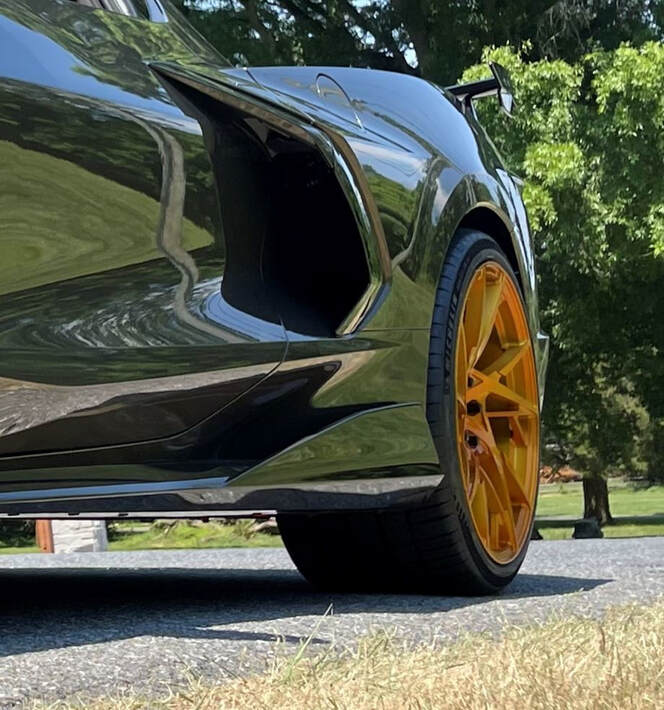 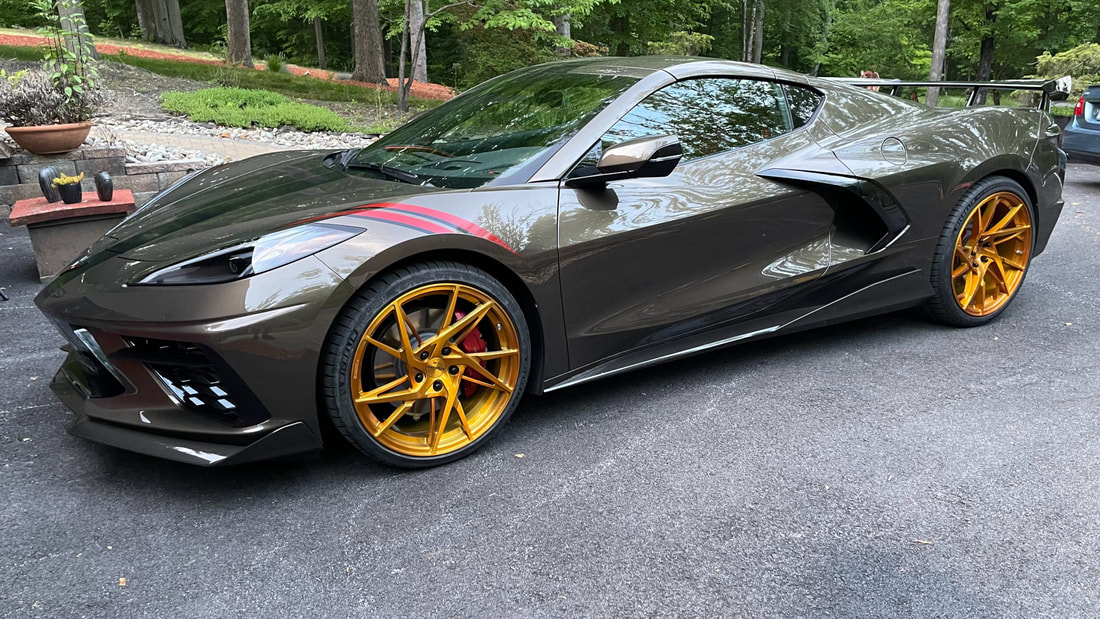 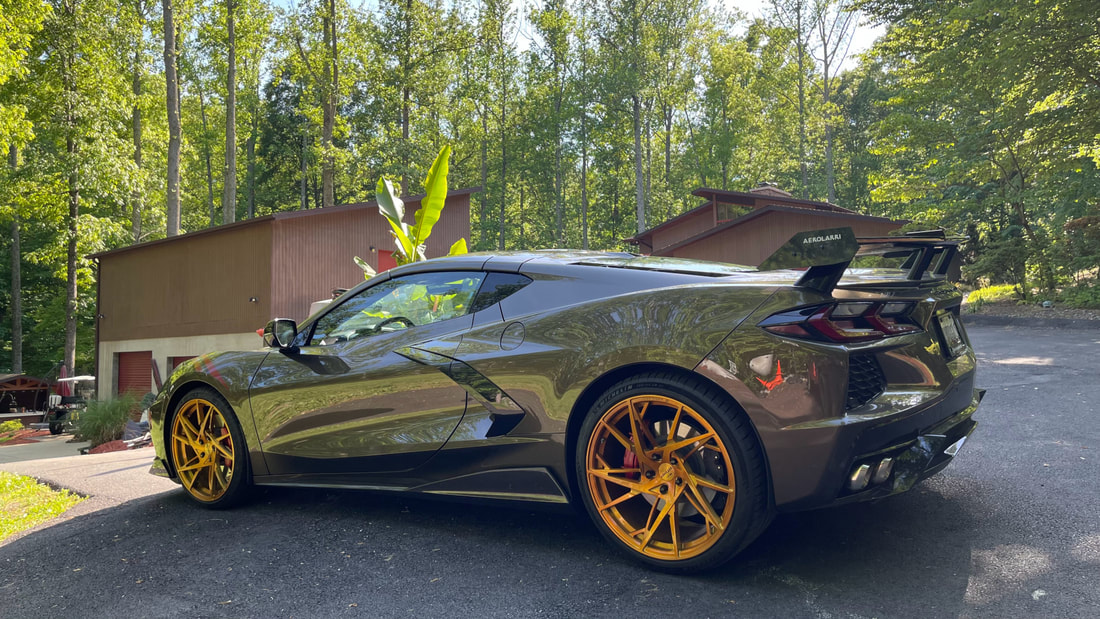 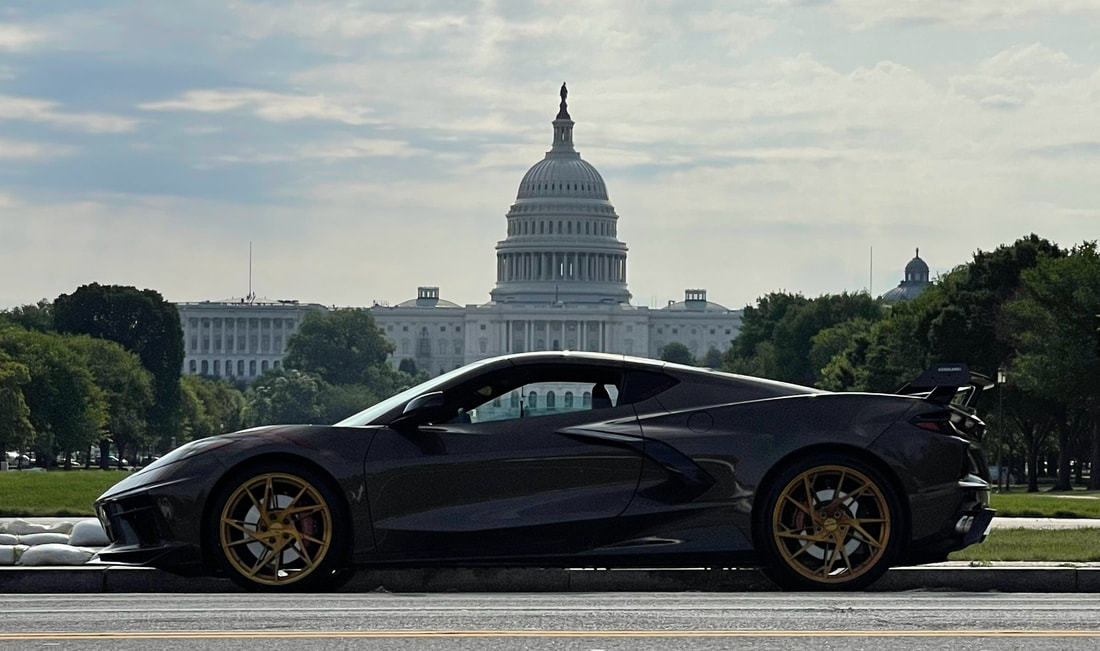 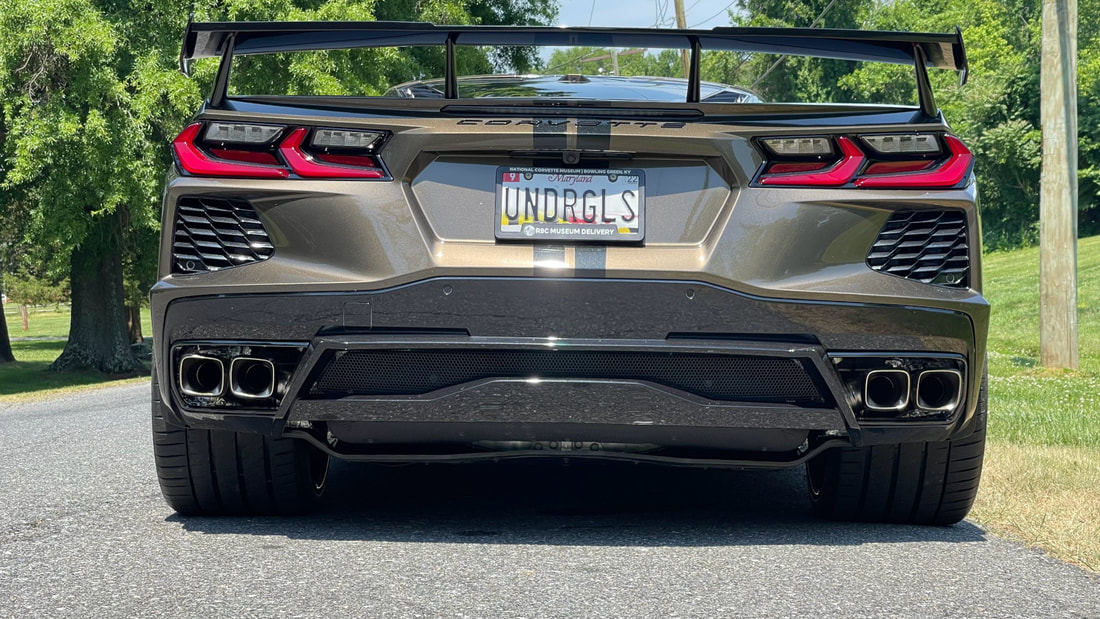 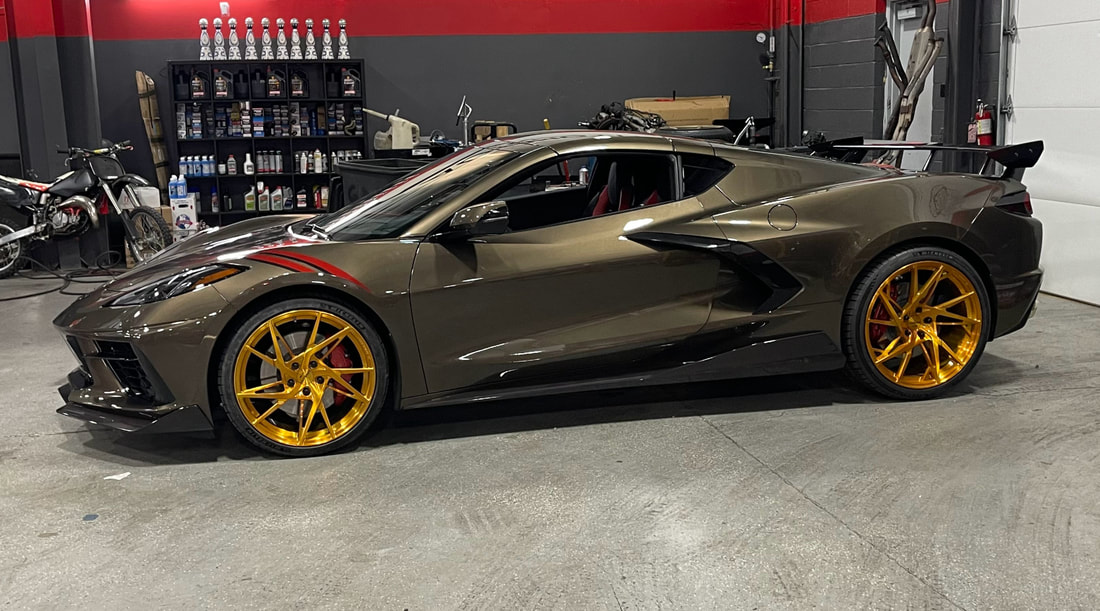 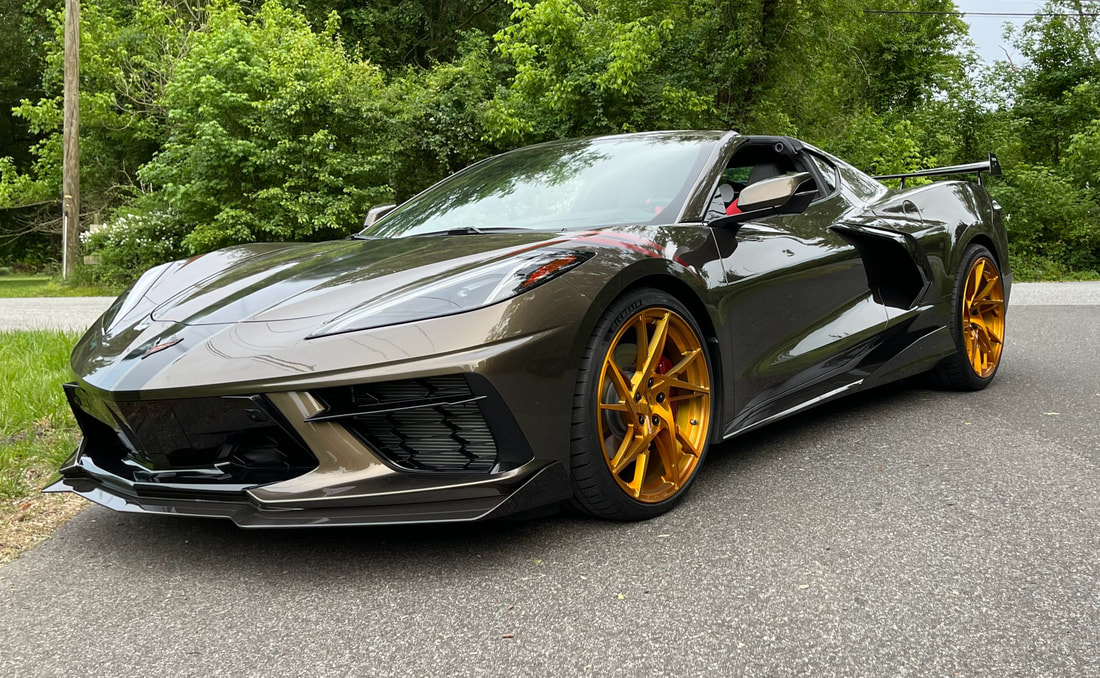 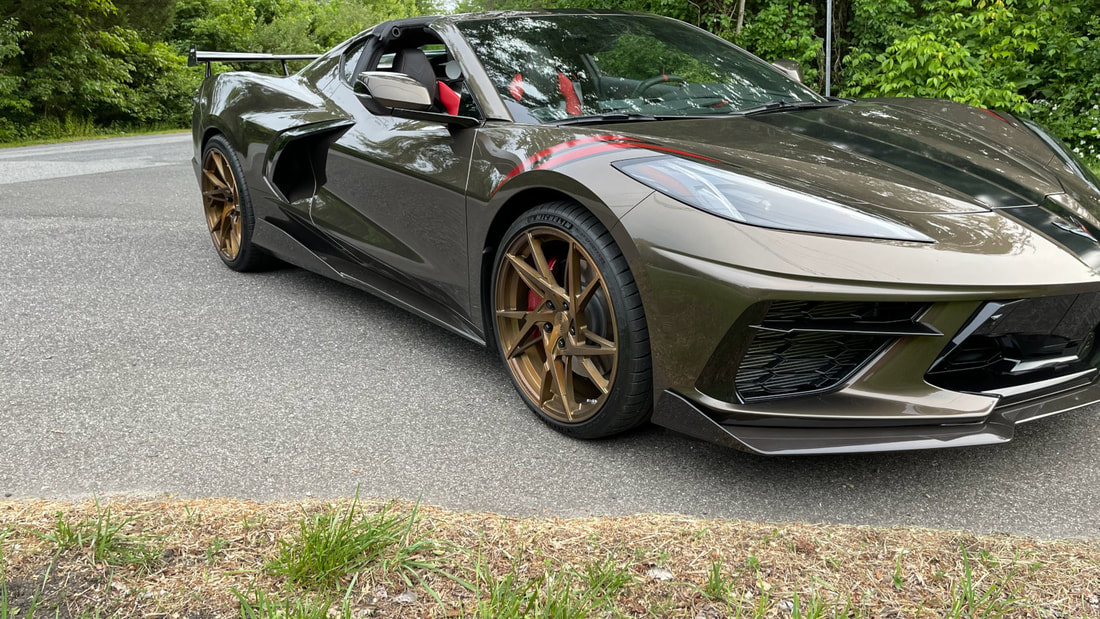 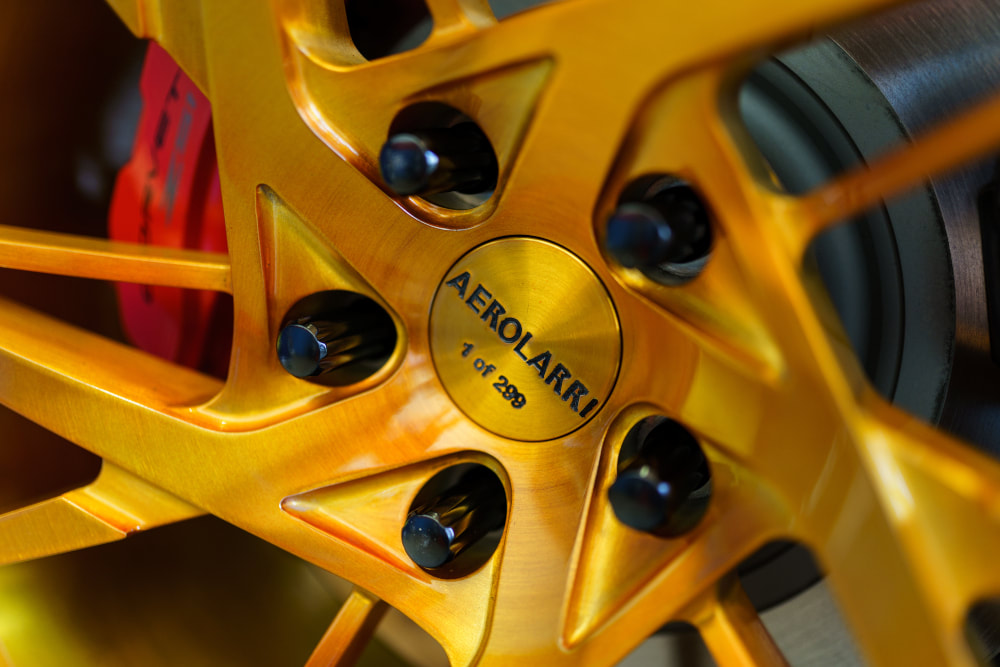 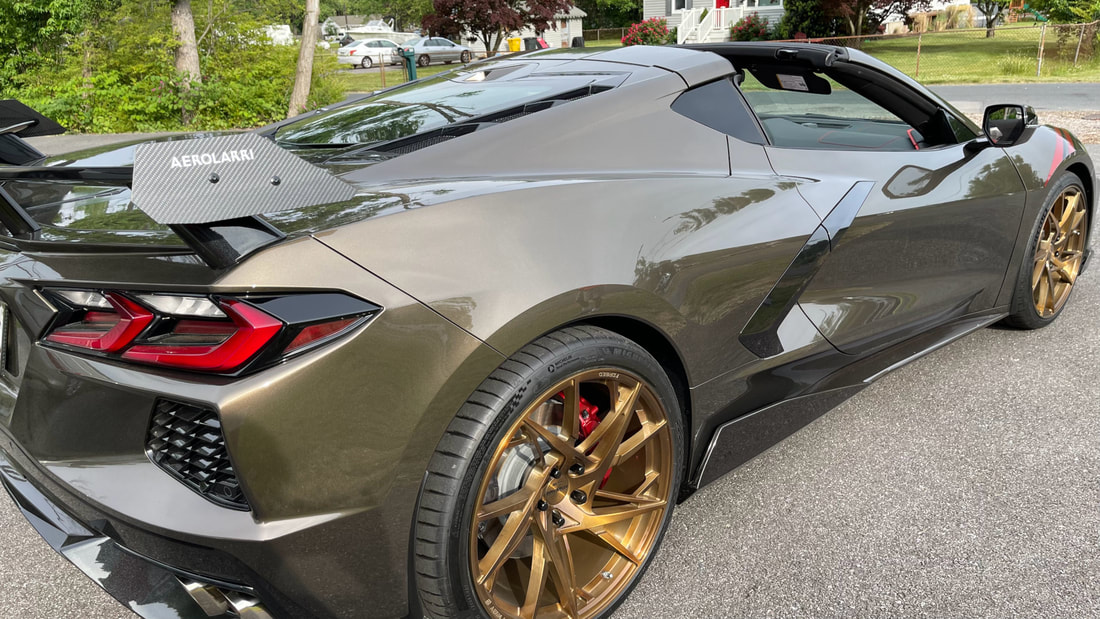 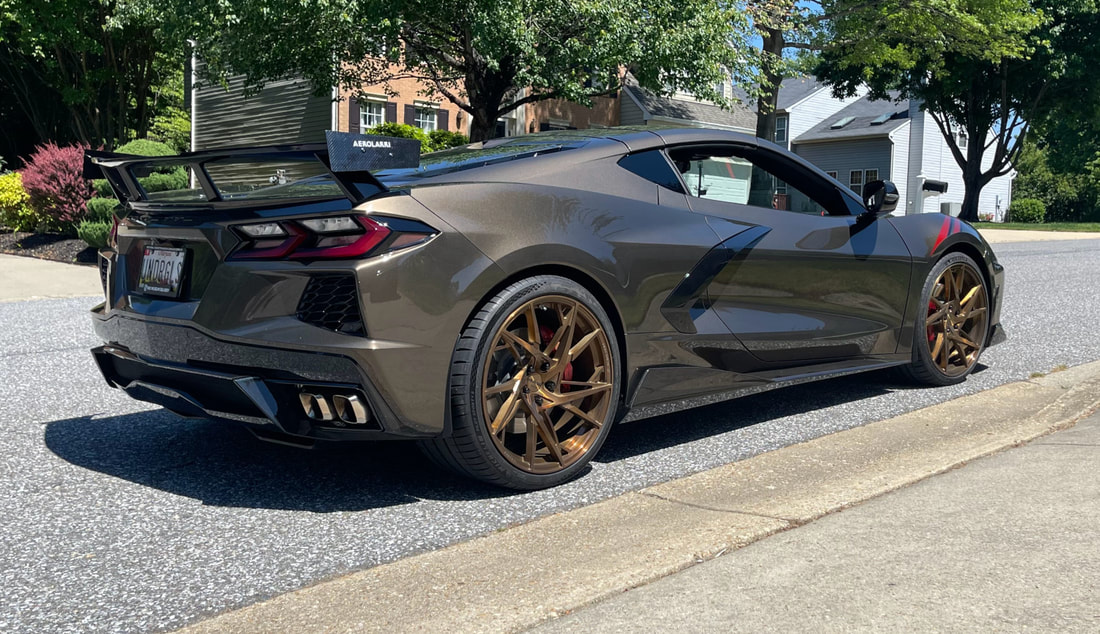 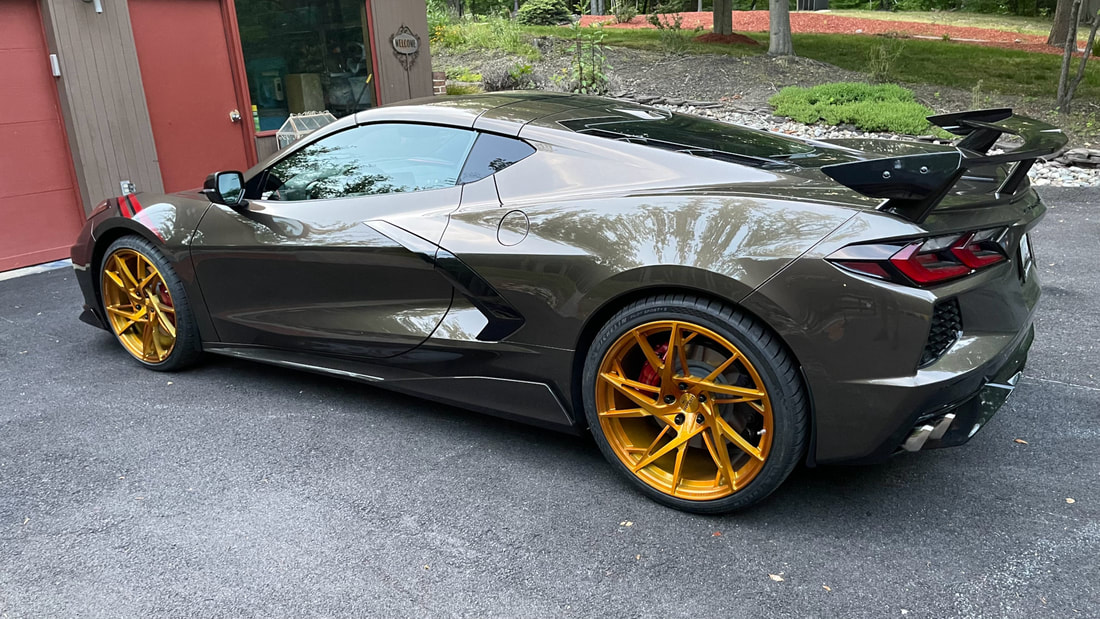 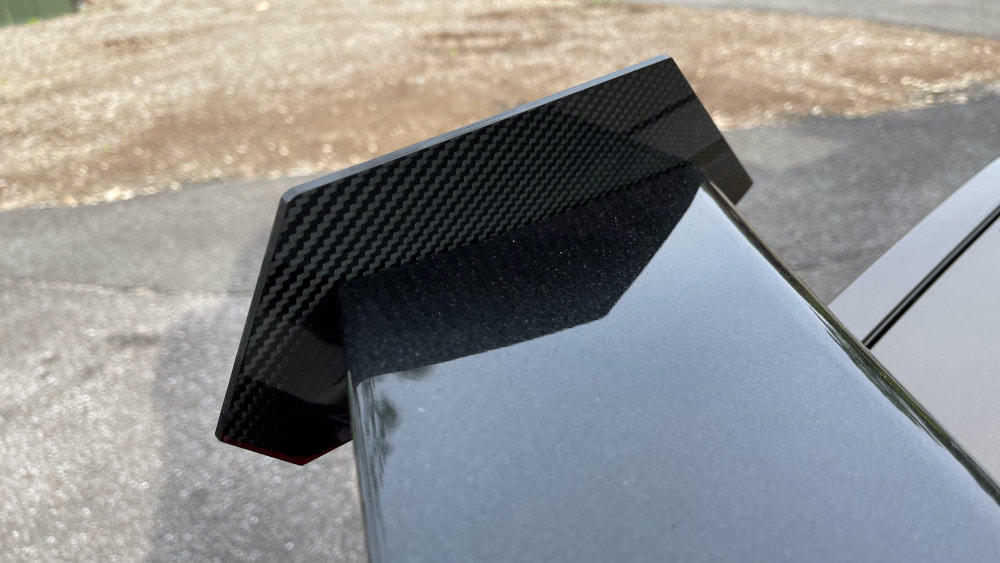 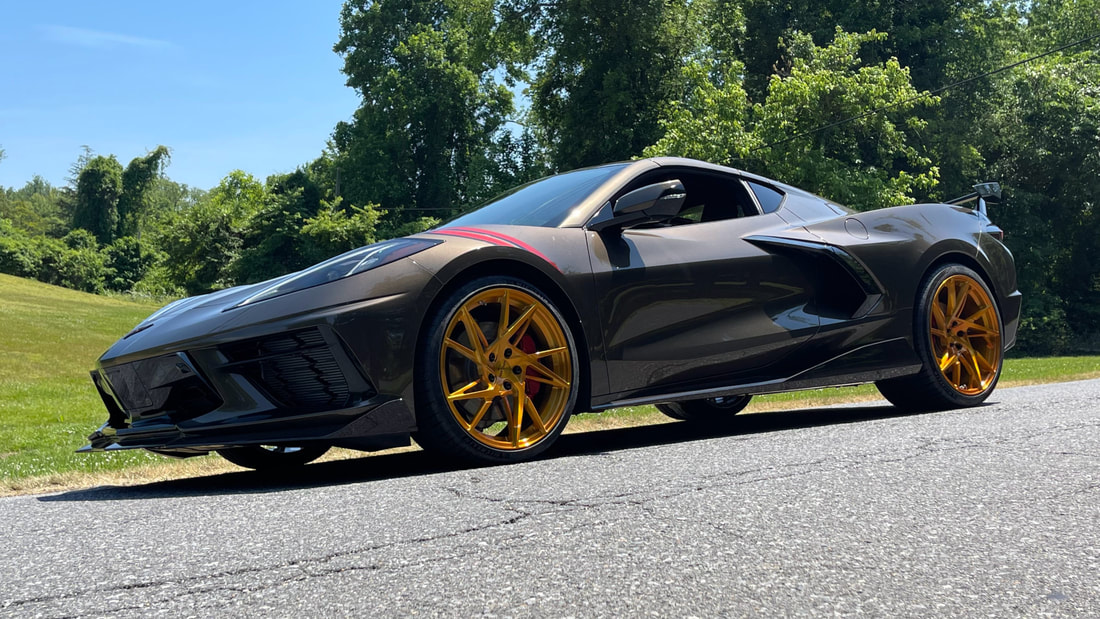 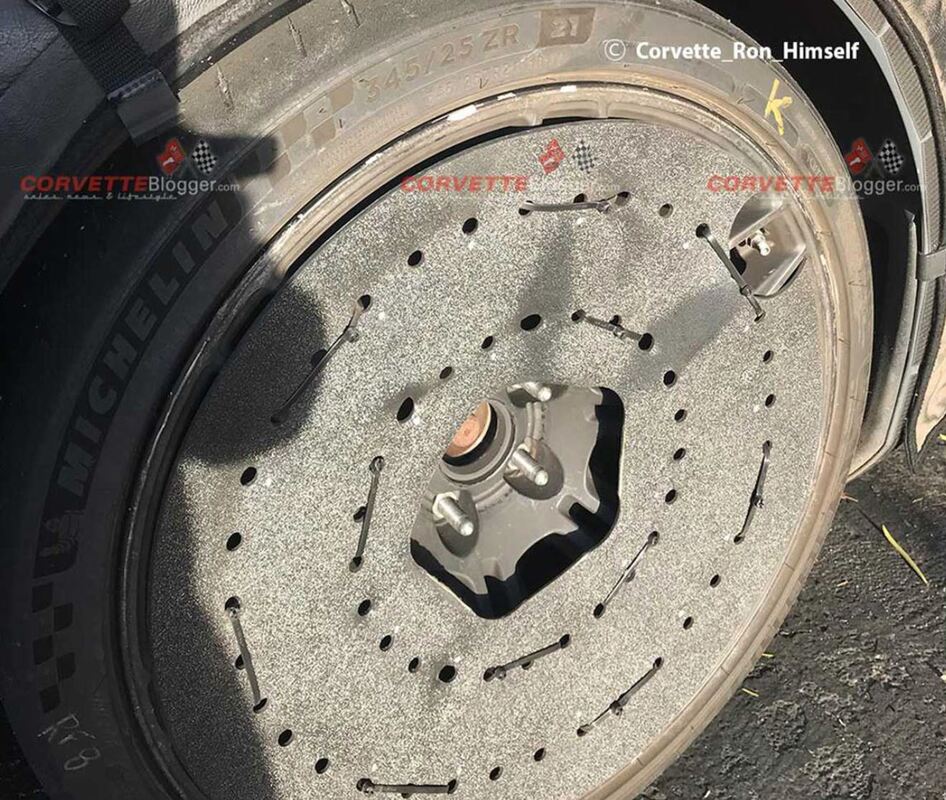 21x13 C8 Corvette Fitment
NO RUB!
The AEROLARRI 21x13 rear wheels for the C8 Corvette are flush with our proprietary offsets. The fitment is not a level of "how flush", but more simply "flush." The suspension geometry curves inward on an arcing path when traveling into the wheel well. Thus, the tire clears the fender lip with just enough room to spare.

NOTE: The rear side of the fender curves inward when going down. This is deceiving. Flushness is measured relative to the very top of the fender where the tire will travel.

Note the curb ramp test where one rear wheel is lifted onto a curb to cause suspension travel. This simulates both lowering scenarios and those when hitting large bumps. 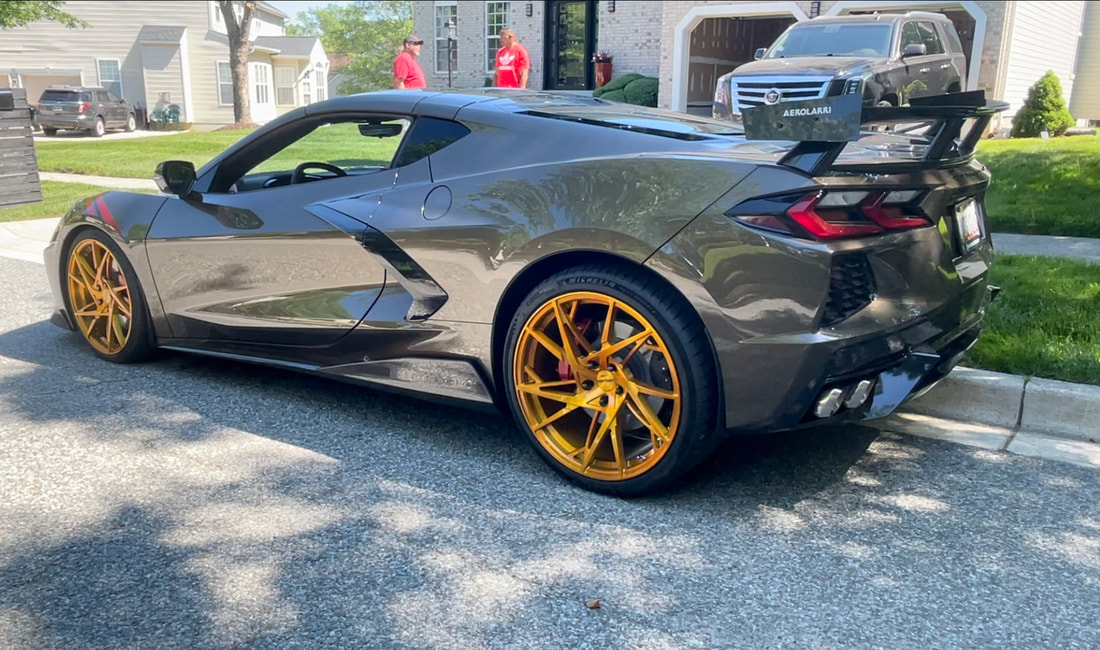 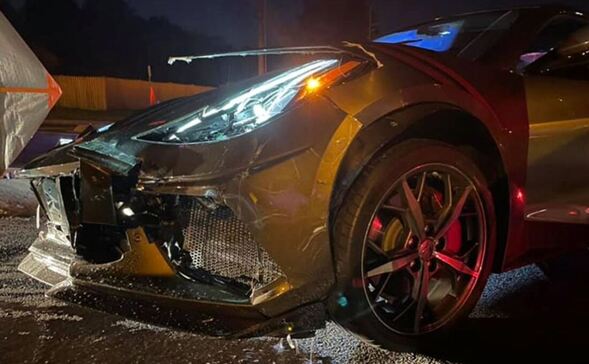 ​Go big...  Or go home
Written by: Carlton Phillips
The Chevy Under Glass
UNDRGLS -Plates
​
The story behind The Two Faced Six Pack by Aerolarri (note the whole process was conducted without ever knowing or meeting each other prior or having a car in hand)  Let me give you some additional background as to being a member of Club Aero and Aerolarri Wheels. The process and concept and design of Aerolarri Wheels started  long before the release of the wheels in April and why I ended up with three sets of number one wheels. Chet Baigh (Founder of Aerolarri) and I discussed his thoughts and wheel designs before September of 2020 and I was just a believer cheering him on.  I saw all of the first designs and was overwhelmed as he kept pumping out wheels designs. I was so overwhelmed at one point I shoved him off on my son, who has the  #1 set  Aerolarri  Warhawk Wheels on his car. During our many conversations I kept saying  "I'll take that one too." We had conversations about sizes, finishes, demographic, production and designs, owners  and we came up with a dual purpose idea and because 325/25/21  tires had disappeared from the market, Chet brought up a 13" rim and a 355/25/21 tire size on a C8  and  crazy cost of the blank but as always I said "Lets do it!" Followed by," If it dosen't work, I'll send you a wheel and we'll both have some bad ass coffee tables!"  We also talked about "Absurd Value" in the of pricing  of Aerolarri (Forged) Wheels.

Fast forwrd to November 2020 and sadly about an hour after finalizing finishes on the wheels and the company had already started  making  "The Two Faced Six Pack" order. I was on my way home  and my car "C8- The Chevy Under Glass" was in a major accident and I called Chet from the crash site conveying I had destroyed the release car and messed everything up. Four days later I had the car in a GM certified  Collision Network Reoair facility and was going for the first rebuilt C8 in the nation by the all-new process as the car saved my life. I was told the repair would take two to three months  and Chet decided to hold the release of the wheels until my car was repaired. Chet kept me abreast of all the new designs and the new C8 owners coming on board purchasing wheels with a vow to remain silent. Sadly three month into the rebuild, my car was declared totaled which changed everything! I told Chet I was going to try and find someone with a C8 to put my wheels on and if he knew anyone willing to put my wheels on their car I was cool with it, because it wasn't about me but about Aerolarri! Luckily Kirby Marcie Baker Montgomery a complete stranger to me volunteered his brand new C8 with 40 miles, to come to my house and allow me to put his car on my 2 post lift and mount my wheels and conduct a photo shoot. The next obstacle for me was trying to obtain another C8.  Chet put out to the members of the group my story and Scott Orcutt put me in touch with Kwame Odum who potentially had a March allocation, and I ordered my car.

Kirby brought his car to my house, I mounted my wheels but couldn’t get the "Meatball" in Kirby‘s words on the car because it was just too hectic, let alone time for proper fitment testing. So we went with the Multicave style and the photo shoot was done. And around two weeks later Aerolarri launched the wheels with the number #2 set of Hurricanes on Jeremy Welborn's car to the public without a mention of the #1 Hurricane Wheel.  Aerolarri had planned on mounting a 13 inch wheel and the Two-Faced Color design long before anyone else and well before the black-and-white two face C8 showed up. I even told Chet "Man they beat us but we had the concept first, I just messed it up!"  and we just laughed it off!

Here's a simple timeline on the #1 set of Hurricane wheels.
11/2/2020 Wheel order had been started before the crash occurred.
11/26/2020 shipping date of 355/25/21 inch tires. ( I have photo proof)
12/5/2020 Manufacture completion
The Two Faced Six Pack
Two different wheel finishes
(Left side) Viking Gold Brushed
(Right side) Champane Bronze Brushed
Two different wheel patterns front and rear.
Front wheels have a different face than the face of the Structure Staggered rear wheel.
Six pack- like beer! As there’s six wheels in the set.
2 - 20” x 9.5”       265/30/20
2 - 21”x 12”          Tires never mounted
2 - 21” x 13" yes 13 inch with 355/25/21 Michelin Pilot 4S  meatballs mounted.
As for my C8 order...  Who could have predicted ordering another The Chevy Under Glass 2021 Replica/Recreation  my 2020  C8  and having it come off the assembly line 59 days later.  I don' t know how it happened but I can say is "Thank You" for everyone involved in the process and the National Corvette Museum, The Bowling Green Factory, staff and everyone involved in designing, delivering and the assembly of these outstanding vehicles.
But most of all to Chet for taking me along for the ride!

****Additionally don’t ask!  As the company stated they would never make another set of two-faced wheels again because of all the complexity in producing the first set. Now if you know Chet he’s always pushing boundaries and he asked the company again and they gave him a Absolute  "No!"
So go big... Or go home!